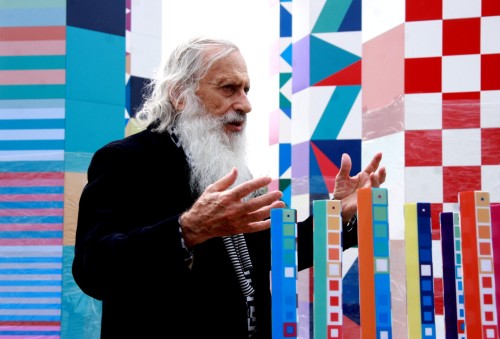 Yaacov Agam creates “Peaceful Communication with the World” for the World Games stadium in Kaohsiung, Taiwan. The sculpture is composed of nine hexagonal pillars, with each side of each pillar displaying a different design. Agam intends for the sculpture to appear different to people at varying heights, providing a unique experience for children to view a transforming sculpture as they grow. Following is an original press release about the sculpture.

United States of America (Press Release) March 25, 2009 — Yaacov Agam has recently completed work on a sculpture gracing the entrance to a new stadium built in Kaohsiung, Taiwan for The World Games 2009, which will take place in July.

The sculpture entitled “Peaceful Communication with the World” is, as with much of Agam’s work, an exploration of how art exists and can interact with time.

By walking through the sculpture on their way into the stadium, visitors are invited to experience, rather than merely “view,” the work. The piece consists of nine 10m high hexagon pillars positioned in diamond formation — or square, depending on where you are standing.

All 54 sides of the nine pillars are painted in different patterns and hues, totaling more than 180 shades. A closer look reveals that the one side of each pillar is also lined to segment the structure into sections.

The purpose of the segment, Agam said, is that as children grow, their perception of a pillar will change because they will see whole different pillars as their eyes hit at a different height.

“Yaacov has been a member of our Park West family of artists for 30 years, and we are constantly impressed but never surprised by his achievements,” said Gallery Director Morris Shapiro. “He is firmly established in the history of art. We’re thrilled that the world will be able to experience Agam’s work up close at the World Games.”

Apart from his influence on the evolution of the visual expressions of the period, Agam extended the fourth dimension (time) into his large scale sculptures. Examples include the monumental fountain at La Defense district in Paris, the Fire and Water Fountain in Tel-Aviv. The unity through the diversity of his creations emphasizes the scope of his prophetic artistic intuition. Agam’s art explores not only new dimensions, but also experiments with new technologies and unique materials. Additionally, Agam never fails to take part in the historical events of his time. From creating a revolutionary environment for the Elysee Palace in Paris to producing a multidimensional art work for President Sadat of Egypt and Prime Minister Begin of Israel in order to promote peace in the Middle East, Agam strives to make his work not only exist in time, but relevant to the time from which it comes.