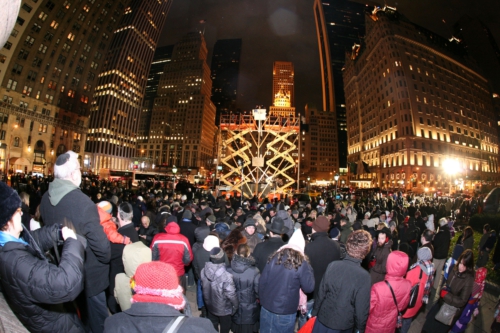 Yaacov Agam‘s design for the world’s largest menorah for New York City is used for the first time.

The tradition began at that location in 1977, with Agam’s design used beginning 1986. That year, the artist lit three of the candles. Officials lighting the menorah need to be lifted in a cherry-picker to reach the lamps atop the 32-foot high candelabra.

The menorah on 59th Street, which is gold-painted steel and weighs 4,000 pounds, was designed by the Israeli sculptor Yaacov Agam, following a drawing by Maimonides of the menorah at Solomon’s Temple in Jerusalem. That menorah had straight, vertical bars, rather than the half-round bars commonly portrayed. (The New York Times)