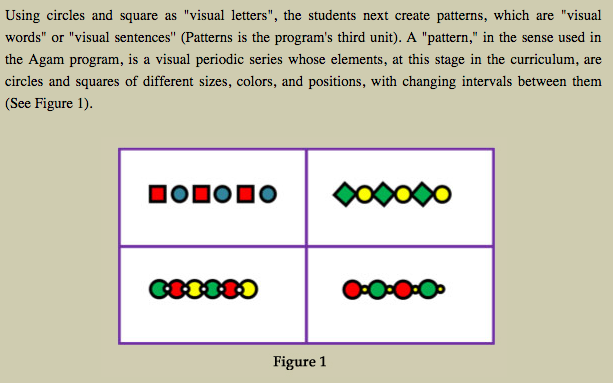 Yaacov Agam develops a visual learning program for 3-5 year-old children. Research confirms the validity of the very promising program which was first implemented in 1984 by the Weizmann Institute. From the institute’s website …

The central goal of the Agam Program for Visual Cognition is to help young children develop their visual thinking, as a means to improve their over-all cognitive and emotional development. The Agam Program was inspired, initiated and written by the artist Yaacov Agam (Agam, 1984). The program was refined, implemented and tested by the staff of the Agam Project at the Science Teaching Department in the Weizmann Institute. From 1984-1990, this work focused on 3- to 5-year olds. (Razel & Eylon, 1986; 1990; Eylon & Rosenfeld, 1990; Hershkowitz & Markovitz, 1992; Markovitz & Hershkowitz, 1996, Hershkowitz, Parzysz & van Dormolen, 1996). Funding problems led to the closing of the program, despite the very promising practical and research outcomes (see “Educational Research” below).

In 2005, the Israeli Ministry of Education renewed the program’s development, implementation and research with 3- to 5- year olds and continuing with the same groups to the third grade. Currently, the program is being implemented in about 90 Israeli preschools and in first- and second-grade classrooms in a several elementary schools, both at the Weizmann Institute as well as at the Teachers Seminary in Oranim, near Haifa. The program is enthusiastically received by the children, as well as by their teachers. Further development of the program is taking place.

View the video introduction and more about the program.

Featured photo: From the Wiezmann Institute’s site on Agam’s program.

Reflects on museum of the future