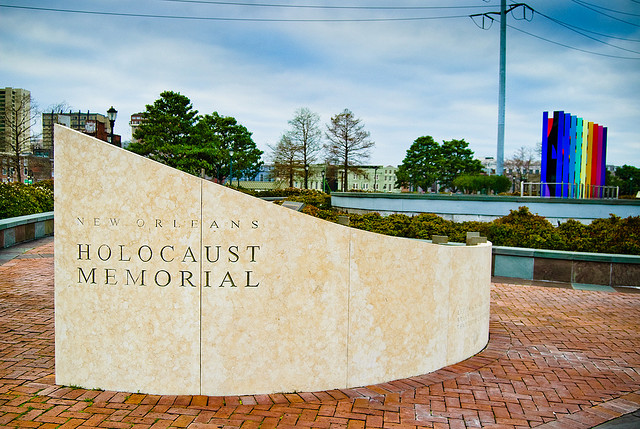 Designed by Yaacov Agam and built in 2003, this public sculpture uses symbolism to tell of tragedy and victory over tyranny.

The sculpture consists of nine unique panels. As viewers travel around the sculpture, the colors create ten viewpoints, symbolizing the darkest periods of oppression during the Holocaust as well as the continued light and spirit of the Jewish people.

Recognizable images include a yellow star of David and a rainbow-colored menorah. Other images abstractly  symbolize human misery. “This Memorial will not only be a remembrance of those who died and those who survived in America, but it will also be our tribute to the spirit of America.  In New Orleans, we were welcomed after World War II.  It was here, in freedom, that we rebuilt our lives, raised our families, started businesses and became part of the American dream.  The memorial will be our statement of remembrance and our expression of eternal gratitude to the people of New Orleans who opened their hearts to us.”

-Shep Zitler
A Holocaust survivor who came to New Orleans in 1949.

Agam: Beyond the Visible published