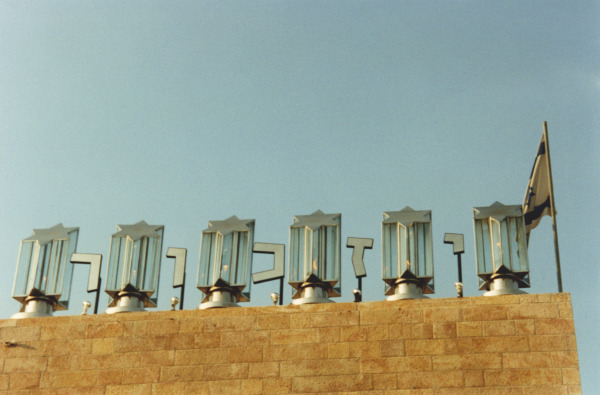 Yaacov Agam creates a stainless steel and fire monument dedicated to the the six million jews killed in the Holocaust. The  that is erected near the Wailing Wall in Jerusalem. Upon its installation, the monument was met with some controversy, which it has withstood.

Six large glass pillars containing fire and water and topped by polished stainless steel Stars of David have just been set up as a Holocaust memorial on top of a yeshiva next to the Wailing Wall.

The memorial has created a uproar, with its critics denouncing it as an abomination and its supporters promising that it will one day be considered as symbolic of Israel as the pyramids are of Egypt.

The man behind the pillars, Israel’s former Chief Rabbi, Shlomo Goren, and the man who designed it, Yaacov Agam, say it is only fitting that a monument to the six million Jews who were killed in World War II be built on the site of Judaism’s holiest shrine, the remaining Western Wall of the Second Temple.