Sunday in New York with Agam 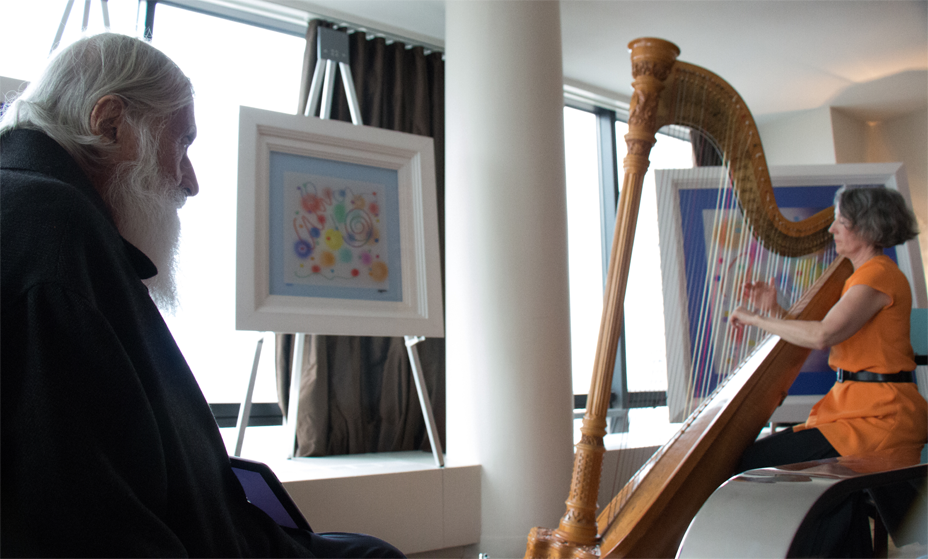 As told by Albert Scaglione:

Yaacov Agam lives in Paris and Israel, and it’s always wonderful to welcome him for a visit to the states. Traveling to New York also gives me an opportunity to spend time with the incomparable Peter Max.

On Sunday, Yaacov was the celebrated guest at a small private cocktail party hosted by Mark Fromer on Manhattan’s Upper East Side. Peter also joined the party – making it feel a bit like old home week, since my relationship with each of these men is more than 40-years strong, and New York City is a mere 15 miles (though in many ways, worlds away) from my childhood home in Nutley, New Jersey. The occasion gave these two iconic artists the opportunity to spend some time with each other. In the photo above, Yaacov demonstrates for Peter a piece of digital kinetic art on a smartphone.

Although the overcast sky obstructed the apartment’s spectacular river-to-river view, guests enjoyed the opportunity to view some of Agam’s rarest works, many of which are one-of-a-kind. They also got to touch and interact with some of his digital kinetic art works that he demonstrated on his smartphone and tablet.

Through our long relationship, Yaacov and I have traveled the world, we’ve watched each others’ children and grandchildren grow, and our connection has been profound in both our professional and personal lives. I treasure it – even when we flex the muscles of our strong and determined personalities. I’m quite sure that’s part of the dynamic that has bound us all these years.

The photo on the left was taken close to 10 years ago. My son Marc (Park West Gallery President), Yaacov and I stand in “Salon Agam” at the Centre Pompidou museumin Paris. I’ve been Yaacov’s art dealer since 1974. I opened the gallery in 1969, and I’ve often said I waited until I felt I was ready before even approaching him. Since that time, we’ve both played key roles in the success of the other. In the photo on the leftwe are with the late – and dearly missed – Itzchak Tarkay. At the party in New York, Yaacov gave a rare performance of his “Harp Musicale.” He narrates while the harp provides a musical imagery to his words. It’s a collaborative piece with classical harpist Chantal Thomas d’Hoste. Chantal added to the brilliance of the event by giving a well-received harp concert of classical and popular melodies. It was a celebration of fine arts.

As a finale – and at Yaacov’s request – Chantal also accompanied me, as I did my best to croon the Elvis hit “Love Me Tender.” I had sung for Yaacov and several other guests while sitting around a table at a dinner party last year, and he wanted to hear more. I admit, it’s not something I’ve done before. I needed a cheat-sheet with the words, and Chantal did her best to keep me in tune and on tempo. I’m not quitting my day job, but it was fun, and I got some nice compliments – so I’ll take them.