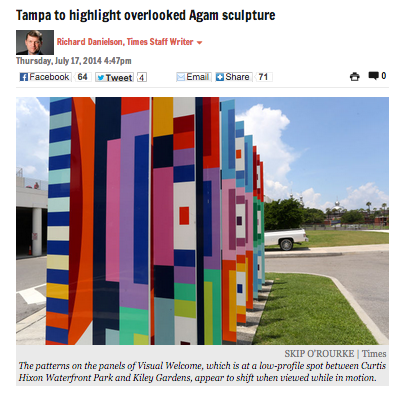 The Tampa Bay Times reports the city council agrees to

Spending $38,515 to restore the geometrical but often overlooked Yaacov Agam sculpture Visual Welcome, which officials plan to move from its low-profile spot between Curtis Hixon Waterfront Park and Kiley Gardens to the median of Bayshore Boulevard. The sculpture is 10 feet tall and consists of nine panels checkered with contrasting squares and color blocks. It’s designed to show viewers a changing array of patterns as they pass by, but since it’s installation in 1995 it’s never received the attention it deserved, council member Mary Mulhern said. Its new home near the Academy of the Holy Names on Bayshore will be better, she said, partly because the sculpture is meant to be seen as people move by and partly because of its unending stream of motorists, cyclists and pedestrians. “Bayshore is a good place for art because it’s so used,” she said.